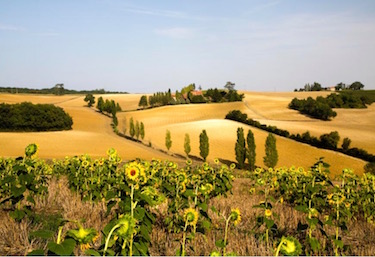 The weekend of May 5-7th is when the traditional Fête du Papogay takes place in Rieix-Volvestre in the south of Haute Garonne. The traditions celebrated go back to 1346 when the English Edward II defeated Phillipe VI by using bows and arrows. The company of archers set up the festival In 1589 since when various towns and villages in France have celebrated with medieval fairs, musicians, dancers and carnival floats and hommage to Saint Sébastian, the patron saint of archers. The actual event centres on the shooting of the papogay which is a wooden or paper maché bird that sits 45metres on top of a pole or a tower. It appears that attempts to shoot the bird occur throughout the weekend with different groups participating. As with most of these traditional celebrations in France, it is a joy to watch or take part in them, after all, this is part of the pleasure of owning a house in France. Whether you buy a house in Midi-Pyrénées in the south or a house in Brittany in the north, you are certain to be able to enjoy this important feature of French life, the adherence to, and celebration of tradition.

Character properties and a perched cathedral.

The village of Rieux-Volvestre, nestling in a lush green valley in the foothills of the Pyrénées, is well worth a visit with or without the festival. It is one of the most beautiful villages of France and apart from the cathedral, known as the cathedral of the Pyrénées, with it’s amazing painted tomb of St. Bertrand, it has a pretty medieval centre which is approached via one of the gated entrances in the ramparts. It also has the Le Village Gaulois L’Archeosite nearby where you can watch all the traditional crafts of the area in a traditional setting. The joy of owning a house in Haute Garonne is that all of this tradition and beauty is within your grasp.

See the exciting properties in Midi -Pyreénées on our web site.

Be Fashionable In Granville
Retirement: Second Homes….Moving To France…Retirement Lived Between France And The UK