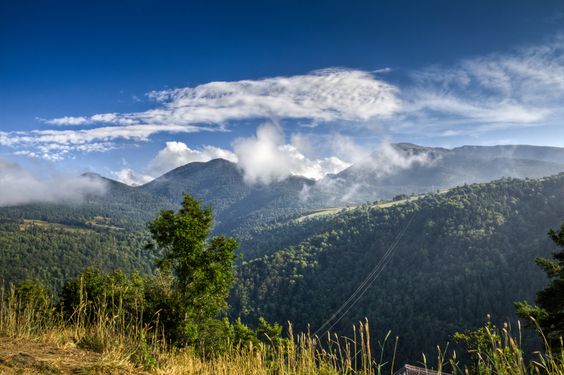 Being bordered by four seas and three mountain ranges the French climate is incredibly diverse. Not only is it made up of five different types of climate but within each of these types, there are numerous microclimates. As so many people quote climate as being one of their reasons for wanting to buy a home in France it is a good idea to endeavour to become acquainted with the potential climate in different French regions. I say ‘potential’ because like the rest of the world, France is also subject to the effect of possible climate change and nothing is as certain as it once was when describing climate.

Starting with northern France, the climate is described as Oceanic and this extends from Nord Pas de Calais, Normandy, Brittany down most of the western coast as far as Bordeaux and inland as far south as the Loire. These regions experience mild winters, especially close to the coast. Summer days can be beautifully warm and sunny but there is little consistency with the climate. Each day may vary but you can be sure of enjoying many very pleasant summer days. Generally the closer to the coast the better the climate.

Landlocked Ile de France, western Limousin, Centre and Midi-Pyrenees enjoy a Semi-Oceanic climate which brings mild and damp winters and springs. Summer temperatures can be high with an absence of any cooling breeze from the ocean but again the weather is variable. It is still not possible to absolutely guarantee the weather for the summer picnic. My experience of living in Limousin was of a long summer consisting of some very hot days and other days of sun and cloud. To my delight, it seemed as though all the rain, at this time of year, fell at night leading many of us to believe we were living in Camelot!

The Alps, the Pyrenees, the Jura, Vosges and the Central Massif experience a Mountain Climate. In these regions you can enjoy cold, frosty and snowy winters and sunny summers, often with high temperatures during the day and thunderstorms in the evenings. Summer comes late and is short with snow arriving often as early as October. This climate gives a huge diversity of nature, breathtakingly fresh air and however warm France gets during the summer these regions always enjoy a breath of cool mountain air.

A Continental climate is enjoyed by regions such as Alsace, Lorraine, Burgundy and Champagne-Ardenne. The annual climate varies from -15 in the winter to +35 in the summer, the greatest temperature range in France. The winters are long, spring is short and summers are hot with lots of evening thunderstorms. For lovers of real winters and real summers this is a good climate with the only compromise being the short spring.

Finally the climate many people search for in moving to France is the Mediterranean one, this stretches all along the Mediterranean coast and inland for a considerable distance. Basically, southern Languedoc, southern Provence, southern Drome, southern Alps Maritimes all share this climate. Often people think that the Mediterranean climate offers hot summer days and warm winter ones. However, most of this area is subject to the Mistral and/or Tramontane winds which can bring exceedingly cold spring, autumn and winter days. Fortunately, these winds normally last only two or three days before the blue skies return and the days warm up a little. When the winds blow, however, they are exceedingly cold and it is quite normal for places enjoying a Mediterranean climate to see a little snow if near the coast to frequent and significant snowfalls further north. What a Mediterranean climate does offer, however, is at least 309 days of sunshine a year and the certainty of hot summers.

Within the five different types of climate in France, there are also hundreds of microclimates. Factors within each climate type, such as the proximity to coast, to ranges of hills, to mountains etc. will affect the very local climate and the only real way to find out about these microclimates is to ask the locals. It is important to remember, however, not to be too fixated on the exact climate you are looking for as in this ever-changing time of global warming there is no lasting certainty. I guess the old tongue twister still holds good….” whether the weather be fine, or whether the weather be not, we’ll weather the weather whatever the weather, whether we like it or not”……and all the other delights of France will still be there.